There are a number of restaurants in our top ten Hall of Fame that are serially up for eviction. At least one will be flung out into the cold this week, to be replaced by a favourite tapas restaurant of ours. Palomar – an Israeli-fusion restaurant – is not amongst these names. It is one of a select few that sit snug and contented somewhere in the top five, an accumulation of goodwill buffering it from relegation.

Nevertheless, like a boxer who is only as good as his last performance, each of our restaurants must defend its reputation on every visit. With that in mind, we dropped in on Palomar last week, weaving through the heaving, surging mass of humanity that clog China Town’s streets, until we found ourselves on Rupert Street, on the fringes of Soho. As usual, Palomar defended its status with aplomb.

We started with the mandatory pot-baked bread that comes steaming out of a tin, soft, fluffy, as light as air, with a small bowl of tomato and tahini to dip it into. I could eat this bread all day long, but I have made it a new dining resolution to not feast myself into a coma on bread before any other dish arrives, and so I satisfied myself with half a loaf, my partner in culinary crime devouring the rest.

Next to touch the table is a small bowl of falafel, little nuggets of chickpeas suffused with chilli and herbs, sat in a shallow pool of cooling yoghurt. I’m normally not a fan of falafel, finding it as dry as the desert climates from which it originates, but these were a powerful exception, rich and succulent.

With the preliminaries complete, we tucked into a pleasant, ocean-fresh sea bream, which came on a bed of green beans in some herbed-oil. The fish was mild and delicate, the flesh pulling off the bones easily. We then helped ourselves to the poetically named Tree of Life, a terrifyingly huge head of broccoli, which was indeed the size of a small tree, and came with feta and tomatoes. It was the sort of thing I imagine a vegetarian might dream about, thick and healthy, delicious from top to bottom, without one sentient creature harmed in its creation… 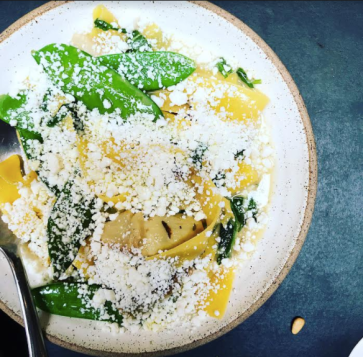 A ‘Persian Pappardelle’ was a pleasant surprise. We live on the edge of Borough Market now, and take the steaming offerings of Padella as the gold standard of pasta in London, but I can’t deny that Palomar’s Persian Pappardelle was every bit the equal of anything I’ve been served in Padella, which the exception of its other-worldly Carbonara. The pappardelle was firm and thick, the lemon sauce subtle and sharp, parmesan grated over the top, and some mange tout crisp and fresh, not a string of starch in them. This was probably the highlight of the meal.

As all this is being served, the restaurant is a whirling dervish of energy. The open kitchen runs like the most chaotic of armies, the chef bellowing orders, with his motley crew of underlings (one with an enormous butcher’s meat cleaver tattooed on her thick forearms) replying in unison, “Yes chef!”. The clatter of pots, the crackle of flames and the hiss of red-hot pans plunging in cold sinks forms the music to your conversation, as waiters and waitresses tap their feet, bob their heads and chat to the diners. This is certainly not a place to have a long overdue catch-up with an elderly relative who is hard of hearing.

By this stage I was starting to flag a little, but since the final dish was a Shakshukit, a sort of deconstructed kebab, consisting of beef, lamb, pistachios and pine nuts, I made a special effort to locate some unoccupied chamber of my stomach. It was a struggle, but I did it.

Twenty minutes later, we limped out into the sunlight, the echoes of “Yes Chef!!” ringing in our ears, full-blown food comas induced, Palomar victorious, its place in the top ten retained.